Silence For the Dead by Simone St. James 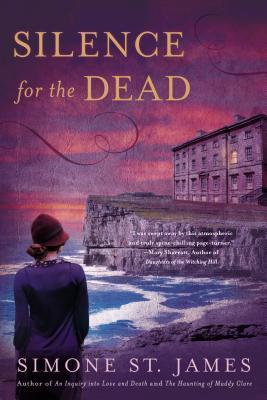 The Great War just ended but for many the horror still remains. 21-year-old Kitty Weekes is on the run. Determined to get out of London, she forges credentials and presents herself as a nurse at Portis House, a “madhouse” for soldiers suffering from PTSD. But Portis House hides its own secrets. The previous owners mysteriously disappeared. An unknown stalks the corridors at night. And the men all suffer from the same terror…someone coming for them at night. Someone now coming for Kitty, too.

Silence For the Dead attempts two things. Separately, they succeed. Together, they fall short of full success. But surprisingly, not as short as I initially expected.

First, the book presents historical fiction with a psychological twist. The plot takes place post-WW1 in a “madhouse” for soldiers suffering from PTSD. Kitty experienced abuse as a child and suffers her own form of PTSD. It all feels very realistic and well-crafted. While the heroine might demonstrate a little too much ‘open-mindedness’ for true historicity, the modern mindset towards mental health does not really permeate these pages and that helps a lot with the setting. These men—and the people around them—view themselves as cowards for giving into their nightmares. As historical fiction I found I really enjoyed the setting and the balance the author strikes.

Second, this is a ghost story. Think And Then There Were None but with ghosts. The characters all live in isolation with no chance of escape, even the staff. Something is coming and they are helpless to stop it. The mystery of the abandoned house-turned-hospital remains an open ended question until the climax. Very intense, very eerie, and very enjoyably put together. I am as a general rule skeptical of ghosts and “mad” characters who act without rhyme or reason. They make such terribly convenient excuses for irrational actions. But the author doesn’t give into the convenience; she does a good job laying the groundwork and setting up the climax. It really pushed this book up a star in my mind.

Separately, then, two good plots. The problem comes when you combine them. It is hard to take the soldiers’ PTSD seriously when ghosts stalk around causing trouble. But on the flip side, it is hard to genuinely enjoy the ghost story when the author so carefully presents actual, psychological issues. The fantasy disrupts the realism and the realism disrupts the fantasy. I never felt the full “punch” of either story line because the other one kept dancing in my peripheral vision, distracting from the actual emotions before me.

But it works in the end. Not, perhaps, as well as it could. But well enough that I do recommend this one if either of those genres catches your interest. It was an engrossing, fun story. I’ll definitely find more by this author.

She looks at me blankly.

“You know…Fridayyyyy the 13th!” I say again.

“And horror. Like Halloween but without any of the redeeming elements.”

“No…just when Friday falls on the 13th. Because 13 is an unlucky number…y’know?”

“Well…it is. And somehow it is more unlucky on a Friday.”

“It is when the moon is…full?”

“No! Well, yes! But like, werewolves and stuff come out. How have you missed all this? I’m sure there was an Arthur episode.”

“Yeah, I don’t know what you are talking about.”

Peoples. My sister somehow missed all cultural context to bad luck or horror movies. I do not know how this is possible. Today has literally no meaning for her.

Movie Night With the Siblings

“Mom and Dad aren’t home! What should we watch?’

“Yeah! Mom doesn’t like those shows or movies. Netflix has all the Halloween movies out. Great timing.”

“Or we could watch a kid’s movie. Parents aren’t home to judge us.”

30 minutes later, Mom walks in. “What are you watching? You always watch lousy TV when I’m gone.”